Hailing from Dumfries, Scotland, modern Indie Rock band The Lutras have today released their anticipated second single Vari, plus a B-side in the form of Times We Had,  a raw and stripped back piano demo.

After the success of their first single, Run & Hide, which was released late 2018, the band have built up a loyal fanbase which has seen them perform relentless live shows not only locally but throughout the UK.

Vari is a powerful song. It is 4 minutes and 15 seconds of pure passion, of a love for music and the sound of four Scottish boys putting their heart and soul into their art. There is no question as to why it was chosen as Radio X’s and This Feeling’s Track of the Week on the day of the release. The track builds throughout, with each unpredictable part lacing together to form an emotionally rich, layered and piercing song. Lyrically, it has a romantic sensitivity that is not lost with the upbeat and riotous soundscape that sits beneath it but rather becomes projected by it.

Bassist and songwriter, Danny Heron explains Vari is ‘a personal song for the hopeless romantics and day-dreamers. For the people who lust for longing, love, and affection.’ Heron’s vision is met flawlessly with the timeless vocals from lead-singer Ben Clements. 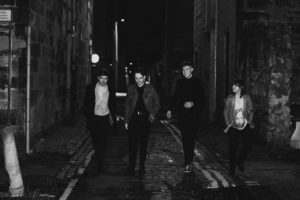 Times We Had takes the strong vocals from Vari and throws them into the most poetic and heartfelt B-side you will hear. It explores themes of letting someone move on and remembering the past in a positive way. It is a perfect companion to Vari, showcasing The Lutras sprawling talent. You can go instantly from the soaring, feel-good sounds of Run & Hide and Vari, and then straight away be met by a song that will undoubtedly tug at every single one of your heartstrings.

Both Vari and Times we Had were produced by Bruce Rintoul, who has previously worked with the likes of Twin Atlantic and Fatherson. The Lutras are without a doubt going to have their name in lights amongst these artists very soon.

You can listen to both tracks down below as well as check out their upcoming tour dates with This Feeling, as their live shows are certainly not to be missed.